Crohn's Disease and Colitis: What to Know 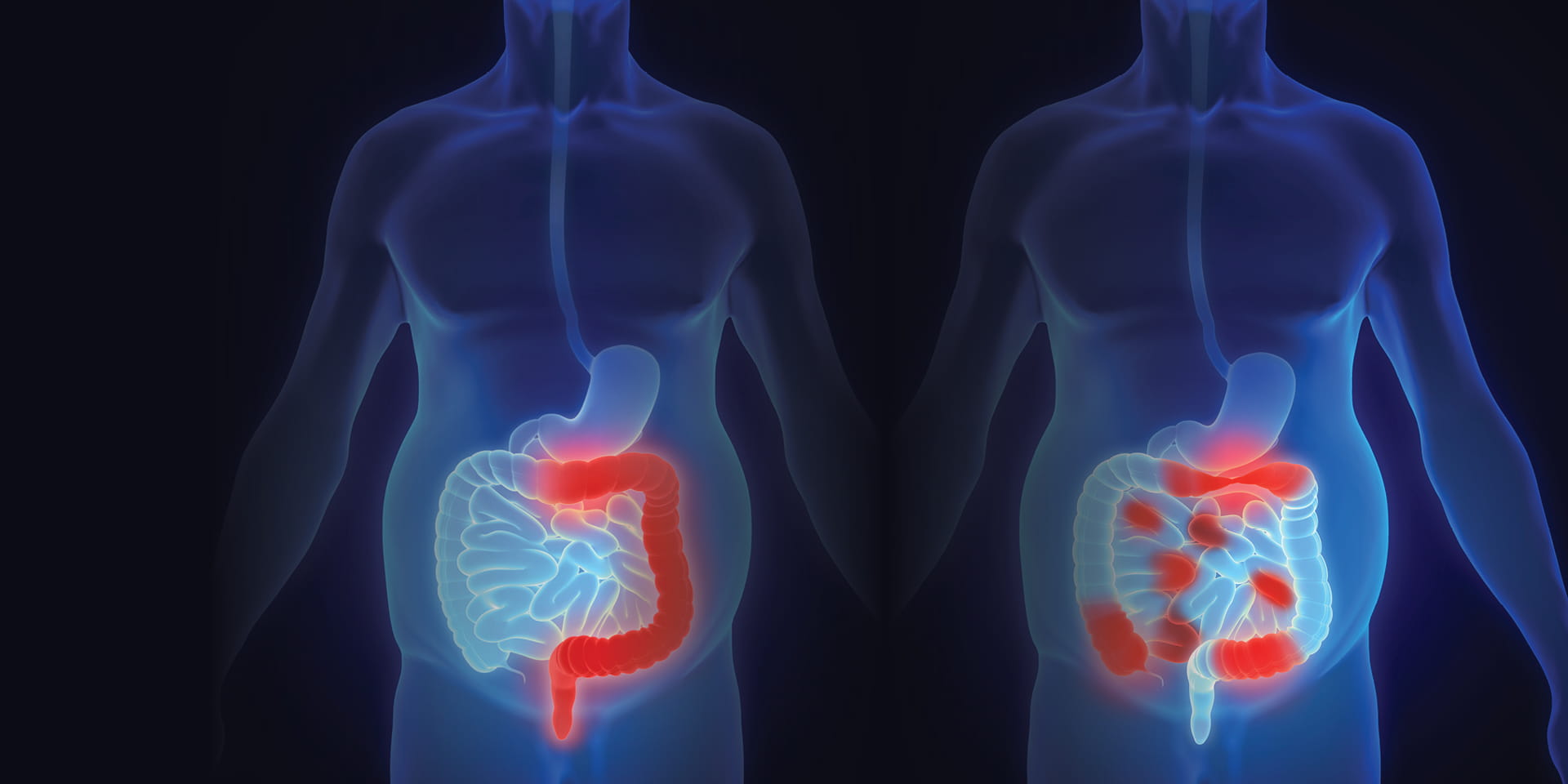 Did you know that the effects of Crohn’s disease can occur anywhere in the gastrointestinal (GI) tract, from the mouth to the rectum — whereas ulcerative colitis (UC) is confined to the colon (large intestine) only?

Despite these differences, both Crohn’s and UC are autoimmune diseases that cause chronic inflammation of the GI tract. Together they fall under the umbrella term: inflammatory bowel disease (IBD).

Whether it’s Crohn’s or UC, the symptoms of IBD are the same. The most common symptoms include abdominal pain, diarrhea, constipation, blood in stools, nausea, vomiting and weight loss.

“The way I describe IBD is immune cells becoming confused or dysregulated. So instead of attacking viruses or bacteria, they inadvertently attack areas within the gut or GI tract and then cause irritation and inflammation,” explains Hannah Do, MD, a physician with Doylestown Health Gastroenterology.

IBD Is Not IBS

While IBD may sound like another GI condition called irritable bowel syndrome (IBS), they should not be confused with each other.

IBD is a chronic, often lifelong autoimmune condition causing inflammation that waxes and wanes with flare-ups and remissions. It occurs in roughly 1 percent of the population, according to statistics from the Centers for Disease Control and Prevention. The disease can be detected through diagnostic imaging, and left untreated or undertreated, IBD can progress to colon cancer.

Known as a syndrome (that is, a set of medical signs and symptoms which are correlated with each other and often associated with a particular disease or disorder), IBS does not cause inflammation and occurs in about 10 percent of the population. When examined through testing, the GI tract appears normal. IBS is not linked to a greater risk for colon cancer.

“While IBS is serious, it’s not to the same seriousness as IBD,” says Dr. Do.

The encouraging news is that the treatment for IBD has gotten so sophisticated that the majority of cases can be controlled to the point where the patient has no active symptoms, according to Dr. Do.

Medication is the key to controlling IBD. Depending on the severity of IBD, patients can take anything from oral anti-inflammatory medications to those that lower the immune system known as immunosuppressants, such as methotrexate. Other more sophisticated medications available include injectable biologics like Humira® to infusions like Remicade®.

Typically, patients undergo testing to confirm an IBD diagnosis. Some tests might include colonoscopy, upper endoscopy, sigmoidoscopy, X-rays, CT scans, MRI, as well as routine blood tests. All of these tests are offered through a Doylestown Health Gastroenterology practitioner.

The practice also offers another sophisticated testing option: video capsule endoscopy. For this diagnostic test, the patient swallows the capsule (a wireless video camera in pill form) in the morning and wears a fanny pack (with computer inside) that reads signals from the capsule throughout the day, explains Dr. Do.

At the end of the day, the patient drops off the fanny pack and Dr. Do uploads that data to her computer that provides about eight hours of information.

“Then the capsule gets excreted in the patient’s stool, so it’s a one-time use thing. We don’t recover that,” she laughs.

IBD can be a serious and overwhelming diagnosis for patients, Dr. Do says, with some patients receiving this diagnosis as early as in their 20s. However, she believes that coping with IBD takes “more of a marathon than a sprint” mentality and patients should take it one step at a time.

Also important to note: Because IBD is an autoimmune disorder that may cause problems not just limited to the gut like rashes and vision changes, a multidisciplinary team is involved in treatment at Doylestown Health Gastroenterology. Patients can be seen by a variety of specialists who work together ensuring the best outcomes for them, adds Dr. Do.

“The really good news is that patient lifespan is not affected if the disease is under good control with a treatment plan,” she says.

For more information, visit the Crohn’s and Colitis Foundation.

Our caring, compassionate gastroenterologists are experts in the diagnosis and treatment of disorders and diseases of the digestive system. Using advanced screening tools, state-of-the-art treatments and innovative technology, our gastroenterology team delivers comprehensive care for conditions of the esophagus, stomach, small intestine, colon and rectum, pancreas, gallbladder, bile ducts and liver. The Open Access Colonoscopy Program allows healthy patients the convenience of scheduling a screening colonoscopy without an initial office visit.